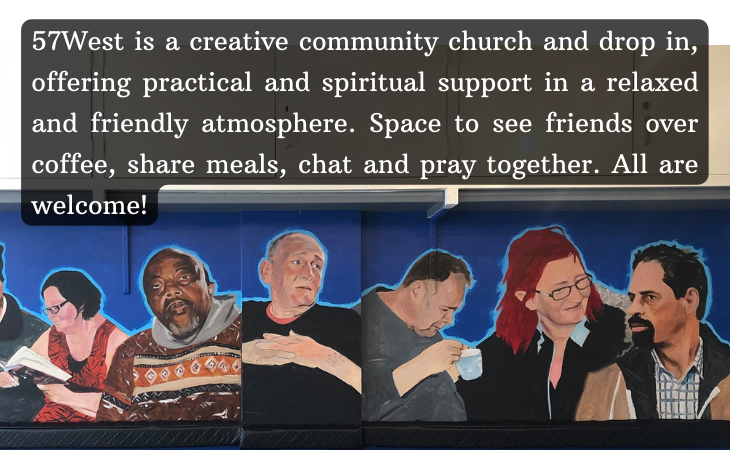 How did it all begin?

In September 2012, several local Southend Baptist churches called and welcomed Dan Pratt, a Baptist Minister in Training to Southend to pioneer a new church for those not already engaged with the Church. This initiative was instigated and seed-funded by Church from Scratch with their Minister, Revd Peter Dominey giving time to help pioneer. A small team of young adults from local churches emerged with the aim of pioneering a new church community among students at the Southend University of Essex campus, Southend College, as well as young adults within the town.

With Southend Christian Bookshop leasing their premises on 57 London Road, the team converted their old Barber’s shop into a drop-in hub and community café. The premises and subsequently the emerging church became known as 57 West. The drop-in café opened with events taking place each week. Following a year of missional activity there was little to show in terms of sustained relationships or church emerging. Discouraged, most of the small team drifted.

Louise Frood, who was part of the team and Dan met at 57 West on the 1st January 2013 to fast and pray. Soon there was a knock on the door. Four rough sleepers with nowhere to go, having seen the lights on and warmth requested to come in. Huddled around the heater with hot drinks the group discussed life and faith resulting in some honest and gritty prayers. One of the guys left and returned with eight further rough sleepers, all cold, damp and tired. The day progressed with more prayers and finally ended with sharing communion. As the bread and grape juice was passed from hand to hand, Dan and Louise had a growing sense that God was saying ‘this is my Church. These are the people who I love’.

The community café went from being quiet to being a hub of activity as rough sleepers and those from low-income households would find warmth, community and belonging. This new focus and energy resulted in more people joining the team including Julie Chambers being sent by Belle Vue Baptist Church as an Urban Mission Worker.

In the first few years the emerging church found contextual ways of practising communion, giving pastoral care, teaching the Bible, and performing rights such as baptisms, weddings, funerals, memorial services (some of which were for rough sleepers who died in difficult situations). Saturday Church emerged out of relationship built from the drop-in. Ten to thirty people attended church, which became a lively and multi-voiced with participants sharing stories of lived experience while exploring the Christian faith. Thirty to sixty people participated in the after-service community meal. Community and wellbeing was promoted through art clubs, camping trips, pamper evenings and film nights.

In 2013, 57 West became a member Church of the Eastern Baptist Association and subsequently commit to a covenant with the wider Baptist Churches of the Southend Area Baptist Network in 2014. This was followed by becoming a member church of the Baptist Union of Great Britain and gained charitable status. 57 West hosted on placement ministers, ministers in training and groups/individuals interested in learning about pioneering from the UK, Germany and Norway. In 2017 Dan Pratt’s book focusing on the ecclesiology of 57 West, Covenant and Church for Rough Sleepers was published by Regent’s Park College, Oxford.

57 West continued to grow its ministry with appointing Julie McEvoy as its Premises and Volunteer Co-ordinator (2014) who helped develop its volunteer base and opportunities for those we were serving. In 2017 Pam Davies was called by the 57 West to serve as Minister-in-Training alongside Dan Pratt. Having outgrown the old Barber’s shop, 57 West moved to larger premises at Clarence Road in 2017 and expanded the ministry through a growing team of volunteers. During this time a regular core group within the church emerged with individuals finding and rediscovering faith. Until 2018, thirteen people had been baptised.

57 West through its ministry among exploited individuals was instrumental in founding The Together Free Foundation (2018) and the Southend Against Modern Slavery Partnership (2018), which Dan Pratt went on to lead, with Pam Davies becoming sole Minister of 57 West.